Diamond Baby Blues Tour seen Lee Aaron back at The Rockpile by popular demand Feb 15th to a SOLD OUT SHOW.

The lighting was in impeccable character, some of the best I have ever encounterd as a photographer. 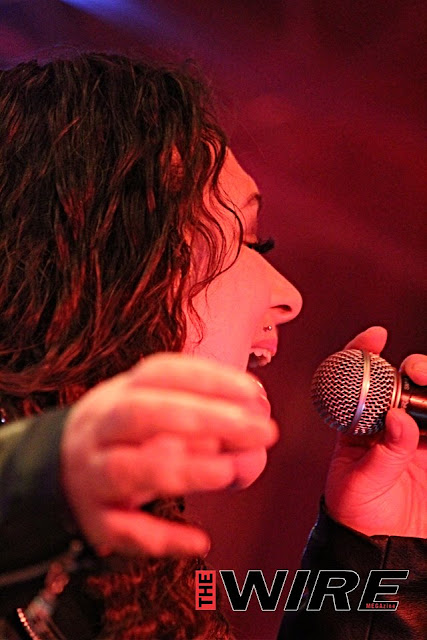 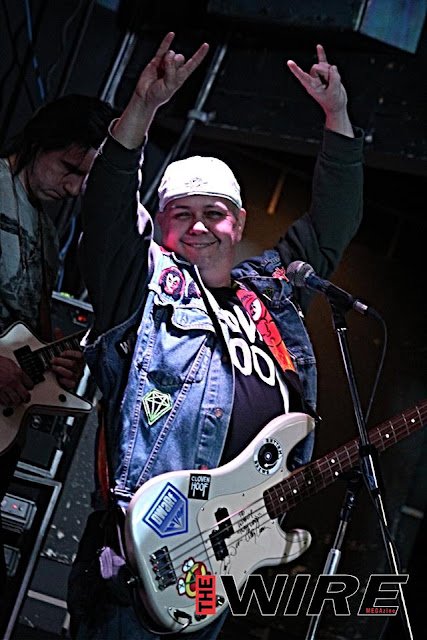 Jaded Edge revved our engines with their innovative manner on hits that after all these years, still seep into your brain like 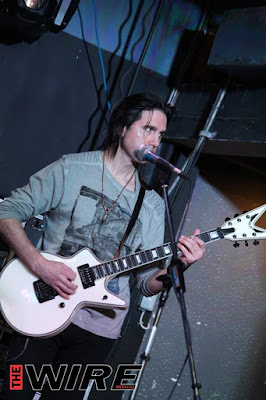 Queen's -Tie Your Mother Down, Pretty Reckless's Take Me Down,
Judest Priest's Living After Midnight and You Got Another Thing Comin'. 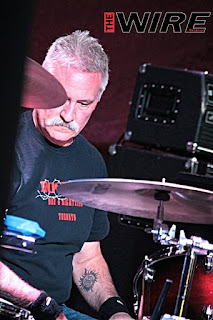 With their formations melded, exhibiting tremendous heat as they rocked us into a frenzy with Cockroach's Hot Stuff setting the tone of the night and closing their set with Dead Daises-Fortunate Son just as the audience began to double in size. 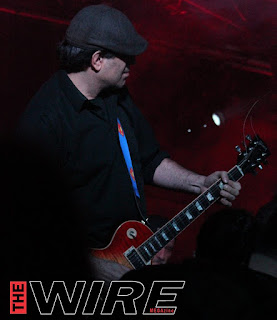 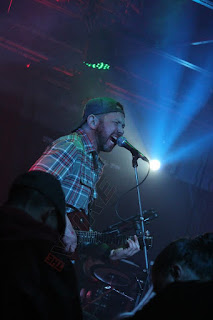 Cover act Barstool Confession, hit the Rockpile for their 1st time all the way from Barrie, another hidden gem you can get lost in time with, as they took you on a musical journey thru their unique configurations as they projected covers spanning 4 decades.  The blended Tush from ZZ TOP, Tragically Hip, REM's the One I Love, Jealous by Black Crows, She Ain't Pretty by Northern Pikes, Rockin In the Free World by Neil Young, right in to December by Collective Soul and rapping up their set with a stimulating version of Wild Flower by The Cult, totally cerebral. www.barstoolconfession.com 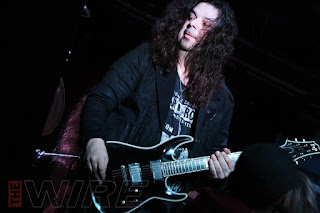 Heavens Fire is an indulgent showcase resurrected by guitarist/songwriter
JT Harris (seen above) in 2012 from the ashes of a band from the '90s featuring a blend of metal, so similar sounding to Stryper, they totally blew my mind.  HF mounted their positions and brilliantly laced their originals with rich complexity fueling us with a truly invigorating old school metal sound!
A work of instrumental genius adding Alexis Von Kraven to their act, this man behind the skull is racked full of passion and creativity that gave an
intoxicating euphoric sense to the tunes. 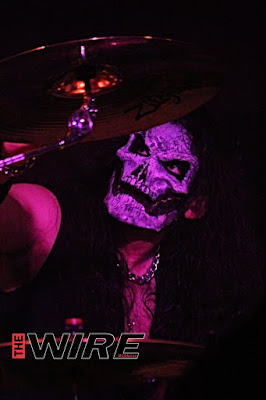 It's no wonder why he is representing huge names in the Drum realm like Los Cabos Drumsticks, Essentric Systems Drum Company, Mapex Drums Canada and D'Addario Canada. 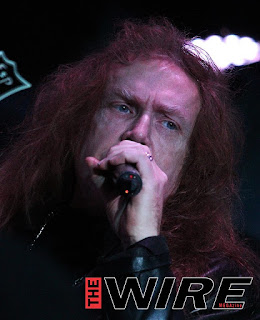 NEW lead vocalist seen above, Maxel Black, brought his A Game, incredible vocal ranges, 1 of the best expressions from this singer to date for me!! 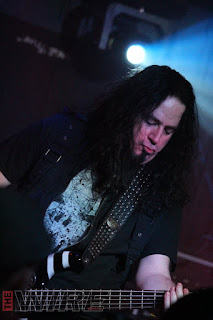 Bassist Extraordinare and local music celebrity RC Ricci, brought the perfect blend of metal spice, richness and hypnotizing flavour needed to round out their exceptional sound.  Playing with Fire was deep and increased the temperature in the club as they Pushed Harder right into crowd-pleasing Children of the Storm, songs from both 2014's Judgement Day and their most current masterpiece-2017's Playing With Fire CD.  Overall, a very magical set leaving me Unbroken and Screamin' for more.


Hop on board this fast-moving entity at https://www.facebook.com/heavensfireofficial 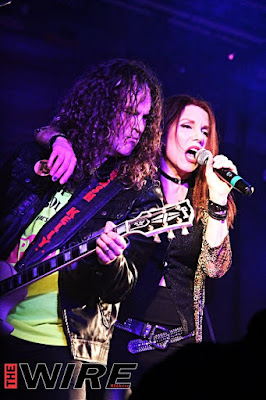 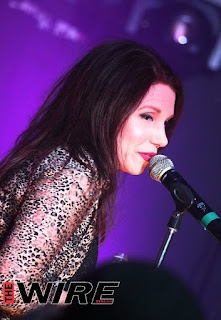 Well into a decade & a half of the 21st century as an innovative legend and notable household name, Lee Aaron and her award-winning musicians, still share & create a wonderful nostalgic sound union with their legions of fans around the world.  Here’s Lee Aaron, now 57, 40 years after it all began in 1979, still sporting that abundance of infectious energy which made for an effortless presentation.  She rocked it hard with some legs kicks, bending backwards even some hair tosses, leaving a perfect photographer's playground. 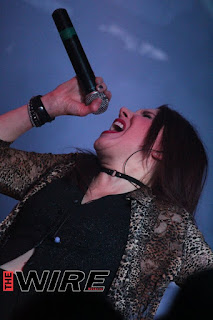 Her vocals were bang on and strong, standing the test of time, and very flexible switching from her trademark metal sound to her high energy blues rock-infused flavour. They projected her stellar 90 minute magic with 17 selections~12 originals and 5 cover songs, consisting of 7 songs from her latest 2018 Diamond Baby Blues album, featuring a cover version of Janet Jackson's Black Cat, original Diamond Baby, original American High, cover version of Clint Ballard Jr's hit You're No Good as she always wanted to record it on her albums ever since she watched Linda Ronstadt nail it. Also, from Diamond Baby Blues was Lee's cover version of Koko Tayler's blues anthem I'm A Woman,  Then, Lee mentioned to the audience that the next song was for those that choose to take the road less travelled which led right into Lee's cover version of Hard Road originally written by Steve Wright and recorded by Rod Stewart in '74.  Pumping out 1 hit from the 2016 Fire and Gasoline  album featuring an original and the title track Fire and Gasoline WHICH was her 1st new album in 11 years, her 1st rock album in 20+ years and her 1st album released fully in the USA.  Sporting originals like her gender equality piece Some Girls Do, noticing the ever-increasing volume of women and younger fans at her shows, commenting on a male in the audience that she spotted singing word for word eyes closed, getting all embarrassed when he realised she viewed him mouth the words "Some Girls Do," she comforted him by saying, "thats alright, anyone can be a girl sometimes".  Sex With Love  and her original Peace on Earth projected from her 1991 album Some Girls Do.  Diving in Hands On, delivering some delicious Rock Candy and Sweet Talk, you just knew with anticipation, that the hits we were all waiting for were coming and bam!  Like it was yesteryear they perfected Whatcha Do To My Body from the 1989 Bodyrock Album. Traveling further back in time to 1984 dedicating the next song to all her old and new fans, "because of you, we are still here making new music" Lee stated, as they tore into the next few chords, revving the audience nuts with horns and fists a pumping high in the air, anxious to hear her signature Rock Anthem that garnered her the title Canada's
'METAL QUEEN' 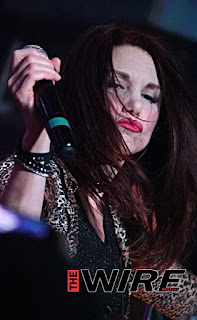 Lee, then announced that she now has 15 albums out as she finished performing the 15th and final piece of the evenings setlist, she wished us well, said thanks and good night.  Deafening cheers and banging of tables brought them back on stage for a 2 song encore with a cover version of My Babe (written by Willie Dixon for Little Walter) found on her Diamond Baby Blues 2018 album which extended into her original Emotional Rain found on her 1994 ODDS of LOVE CD. 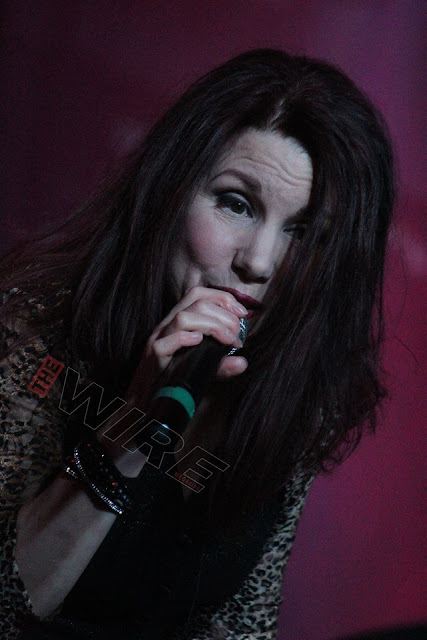 This 10 time Juno Nominee, Toronto's Best Female Vocalist, CMPA songwriter recipient, and multi-platinum artist (top 20 most influential albums of all time) and hometown Brampton's Walk of Fame recipient Lee Aaron, shows no signs of ever winding down.  She's got lots to celebrate as she reaches 4 decades in the biz, continues to sell out shows and the recording of her NEW 2019 LIVE Album.  Her passionate drive and versatility as she continues to evolve, secures her longevity in this thang they call rock n roll.   Stroll on over and stay in tune at
www.leeaaron.com
www.therockpile.ca